Manchester, New Hampshire, is a special city because it’s the state’s biggest city, and it’s the largest city in the northern region of New England with a population of over 110,000 people. Residents love dwelling here since it’s very affordable and possesses a high quality of living. According to CNN Money, the city is also a great place in which to start a business. Manchester happens to be the namesake of Manchester, England, the first industrialized city in the world.

Manchester isn’t just a hotspot for new businesses; it’s also a major hub for the arts. This town is home to the New Hampshire Institute of Art, and many students from that school engage in a weekly poet venue called Slam Free or Die. Another art-related venue in the city is the Currier Museum of Art. It holds several collections of American and European artworks that include photographs, paintings, and sculptures. Besides art, the museum features live classical music, tours and special days filled with family-friendly activities. Watch the local sports teams play sports like rugby, baseball, ice hockey, football and roller derby. An interesting fact about Manchester is that it’s the only city in its state with professional sports teams. It’s also home to several youth leagues. McIntyre Ski Area is a ski facility located in Derryfield Park. You can ski, snowboard and engage in tubing. It also has a ski school if you’re new to skiing. When ski season ends, McIntyre Ski Area is open to host weddings, conferences, and other events. Grab a sandwich and something to drink at Restoration Cafe. This eatery offers a variety of foods like soups, breakfast items, coffee, smoothies, tea, salads and more.

Thirty-seven percent of Manchester real estate properties are single family dwellings. Many Manchester homes are also made up of townhouses, mobile homes, and apartments. Most residences in this city have an ancient touch because they were constructed before 1939. Whether your goal is to open a business or pursue the arts, Manchester is an excellent city in which to live. Its basic amenities are easily accessible, and the weather is nice and balmy during the summer months.

If you’re looking for homes for sale in Manchester, New Hampshire, don’t hesitate to reach out to us.

You can have the best of both worlds when you move into this fantastic river view condo located in the North End of Manchester; within walking distance to downtown and co...

Just Listed! Settled on a dead end street in the desired North End of Manchester this well cared for and loved home is ready for you to move right in! Light and bright, y...

Elegant Victorian-era style residence, with three levels of living, 5 bedrooms and 3 baths, is well sited on a large private fenced yard in the desirable North End of Man...

TO BE BUILT! The Laurel is a brand new ranch floor plan only available on this lot. The two bedroom home offers an open concept layout with vaulted ceilings and oversi...

Great opportunity to own a move-in-ready home in the highly sought after North End in Manchester! Enter through your oversized farmers porch into the foyer area. The open...

Back on the Market!! Great office space location in the North End-Downtown area of Manchester. Suitable for multiple uses. Was last use as a full service dental office. T... 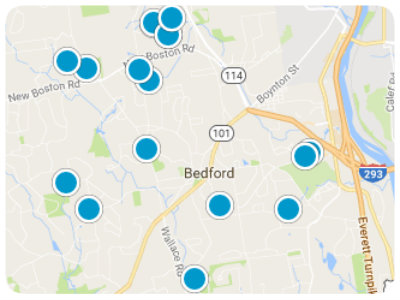